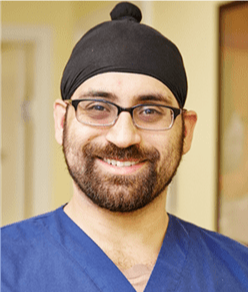 Amit Singh Kalra, DPM, is a dedicated podiatrist at Starrett Podiatry in Brooklyn and New York, New York, who is passionately devoted to his patients and his profession.

Having experienced foot pain at a young age brought on by flat feet and athletic injuries, a career in podiatry called to him. Dr. Kalra strives to help others who are suffering from their foot issues.

After earning his Bachelor’s degree in Nutrition in 2003, Dr. Kalra pursued an advanced degree in Exercise Science at Ithaca College. During his time as a graduate student, he served as an intern for the United States Olympic Committee (USOC).

As part of his duties for the USOC, Dr. Kalra worked alongside athletes at the Olympic Training Center in Lake Placid, New York, to aid them with their strength and conditioning programs. Dr. Kalra completed his graduate studies at Ithaca College in 2005, receiving a master’s degree in Exercise and Sports Sciences.

After graduation, Dr. Kalra began his studies in podiatric medicine at the Rosalind Franklin University of Medicine and Science (RFUMS). During this program, Dr. Kalra served as both a tutor and a teaching assistant.

After earning his Doctor of Podiatric Medicine degree in 2009, Dr. Kalra moved back to the East Coast to start a podiatric medicine and surgery residency at Long Island Jewish Medical Center in New Hyde Park, New York. Dr. Kalra is a member of the American College of Foot and Ankle Surgeons, the American Podiatric Sports Medicine Association and the New York State Podiatric Medical Association.

Dr. Kalra takes pride in using his extensive knowledge base and varied skill set to achieve optimal outcomes for his patients at Starrett Podiatry, where he has been on staff since 2014.